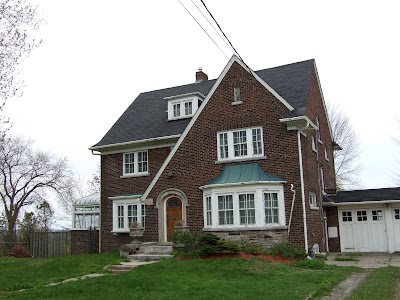 
The large house at 2621 Lake Shore Blvd West was built circa 1927 for John McBride.

He was a first cousin of Sam McBride, a two time Mayor of Toronto serving his first term in 1928-1929 and his second in 1936.  Sam McBride died on November 10, 1936, becoming the first sitting Toronto mayor to die in office.

In 1927 he purchased a lakefront lot on the Lake Shore Road and built the home that he would live in for the rest of his life.  He died there on August 5, 1953 at the age of 82 years.  He is buried in Prospect Cemetery.

In 1955 the house was sold by his estate to Arthur and Margaret Mercer.  I had the opportunity to talk to Mrs. Mercer in the mid 1990s.

She must have passed away a few years ago as the house was sold.  A demolition permit was approved by the Etobicoke-York Community Council in 2008.  The future of the house is uncertain.  Hopefully the owners will see the value in renovating this handsome and impressive house.

City staff just confirmed that the John McBride House has been demolished.  Another loss of a historic Mimico Beach estate home.
Posted by Michael Harrison at 6:13 AM 4 comments: