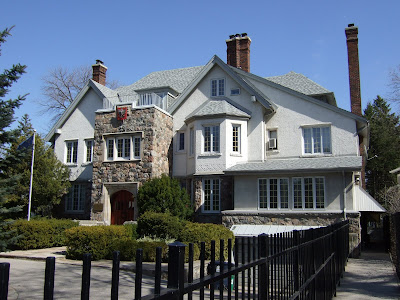 The largest home built on the Mimico waterfront was that built by Lawrence J. McGuinness at 2603 Lake Shore Blvd West in 1927 set behind tall ornate gates.

The mansion was designed by architect John Wilson Siddall (1861-1941) and is built in limestone in the "English Tudor" style.  It originally had 21 rooms including six marble bathrooms, four fireplaces, a panelled library, two solariums and formal gardens extending to the lake.

From here he continued his profitable distilling and distribution activities until Prohibition was revoked in the United States in 1933. McGuinness was well known in Toronto, and was a personal friend of Ontario Premier Mitch Hepburn. In 1938 he built a distillery and bottling plant in Mimico. He died in 1951.

Upon his death his son Larry McGuinness Jr. took over the family business. Educated at Upper Canada College, Larry Jr., competed as an equestrian in the 1952 and 1956 Olympics for Canada. In 1973 he sold the distillery operation for $4 million, bringing his net worth to a total of $7 million. Following the death of his mother he sold the mansion to the Polish Government in 1976. A year later he declared bankruptcy after a series of bad investments in mining. He later moved to Florida to live with his brother and son.

The house still remains in the ownership of the government of Poland and is their consulate in Toronto.
Posted by Michael Harrison at 8:59 AM