Lynne Lodge
courtesy of the Canadian Architect and Builder, 1899

One of Mimico's most fabulous estates, it was built by Frederick Barnard Fetherstonhaugh, a pioneer patent attorney, who was born in Bruce County in 1863, went to law school and got rich satisfying the need for patent protection of the many technological innovations of the late 19th and early 20th century.  Along the way he founded Fetherstonhaugh and Company, a patent law firm with offices around the world (which still exists today).  Mr. Fetherstonhaugh built the first electric car in and established his estate in Mimico in 1899.  The main house "Lynne Lodge" was designed by Henry Sproatt, and a few years later was joined by "The Towers", Mimico's only castle folly. 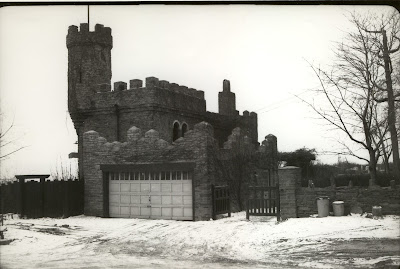 The divorce settlement from his second wife resulted in the loss of his company and fortune.  In the end, he lived in his decaying estate with a number of strangers who it is alleged, took advantage of a sick old man and stole what was left of the estate.  He died virtually penniless in 1945. 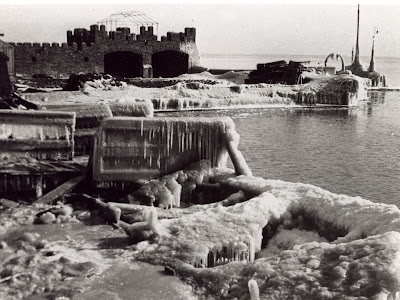 The former estate is now covered by apartment buildings, with only the Gardener's Cottage and Boathouse, and a few landscaping elements remaining to give one a sense of the grandeur of the Fetherstonhaugh Estate. 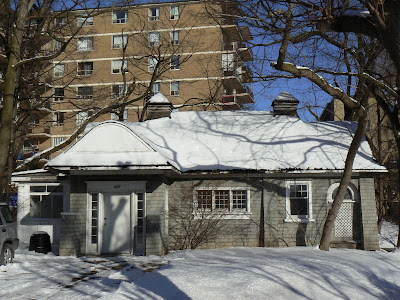 
In February 2011 when I discovered that the owner of the Gardener's Cottage was seeking to demolish it I requested that the City of Toronto designate it, the Boathouse and remaining landscaping elements of the estate under the Ontario Heritage Act.  At its meeting on February 16, 2011 the Etobicoke-York Community Council deferred consideration of the demolition application until May 2011 in order to allow Heritage Preservation staff adequate time to review my designation request.


On May 2, 2011 the agenda for the Toronto Preservation Board meeting of May 5, 2011 was posted online.  I received the following notice from the city of Toronto:


Please be advised that the Toronto Preservation Board will consider the above noted matter at its meeting scheduled for Thursday, May 5th, at Toronto City Hall, 100 Queen Street West, Committee Room #2, Second Floor at 2:00 p.m.  Toronto Preservation Board meetings are open to the public, and you or your representatives are welcome to speak or write in to this body.


If you would like to depute at the Board meeting, please contact Margaret Sexton of the Clerk's Department at 416-392-6316 or email her at msexton@toronto.ca with your name, address and telephone number and the item in which you are interested.

Below is my submission to the Toronto Preservation Board: 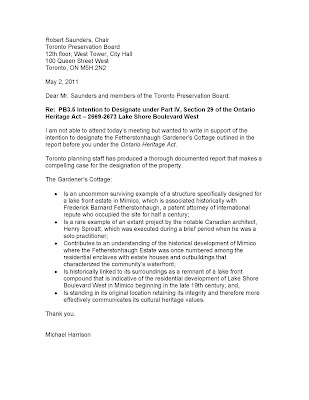 The recommendation from Toronto planning staff that the Gardener's Cottage be designated under the Ontario Heritage Act was adopted by the Toronto Preservation Board at its meeting of May 5, 2011.  The report will now proceed to the Etobicoke-York Community Council meeting of May 25, 2011 for consideration.  I will post more on this when the agenda for the meeting becomes available on the City of Toronto website.  Letters/emails of support for Etobicoke-York Community Council to adopt the recommendation would be very helpful.

The agenda for the May 25, 2011 Etobicoke-York Community Council has now been posted online. The Fetherstonhaugh Gardener's Cottage item is item EY7.5: (May 25, 10:30 AM) Intention to Designate under Part IV, Section 29 of the Ontario Heritage Act – 2669-2673 Lake Shore Boulevard West (Ward 6) http://app.toronto.ca/tmmis/viewAgendaItemHistory.do?item=2011.EY7.5

You will note a letter from the owner's lawyer is also posted online right after the report. Deputations are listed to begin at 10:30am. Deputations and/or written submissions would be most helpful. They should be addressed to: Councillor Mark Grimes, Chair, and Members of Etobicoke-York Community Council and can be emailed to etcc@toronto.ca. If you could also send me a copy that would be appreciated (mimicohistory at hotmail.com).

Below is a copy of my submission: 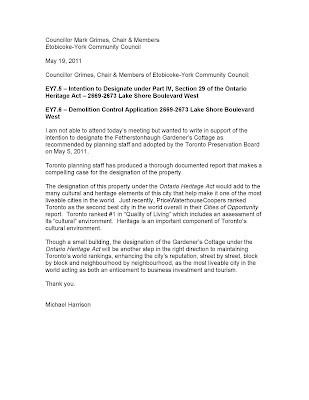 At the meeting the item was deferred again.  This time until the Etobicoke-York Community Council meeting of September 12, 2011.

Further information can be found in the article appearing the next day in the Etobicoke Guardian:

Consideration of the recommendation to designate the Gardener's Cottage under the Ontario Heritage Act will occur at the September 12, 2011 meeting of Etobicoke-York Community Council.

I am pleased to inform you that the following recommendation will be proceeding to the September 12, 2011 Etobicoke-York Community Council meeting:

The City Planning Division recommends that:

The survey can be viewed here:

Thank you everyone for your letters of support on this issue.  Toronto City Council approved the recommendation on September 21, 2011.  As a result the Fetherstonhaugh Gardener's Cottage will be designated under the Ontario Heritage Act in the near future and hopefully be with us for many years to come.
Posted by Michael Harrison at 10:43 AM