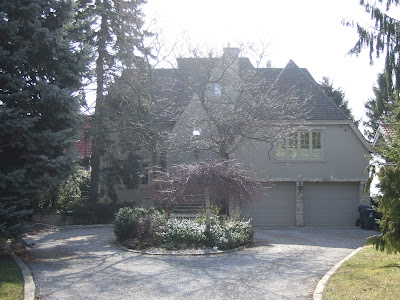 This large home at 2635 Lake Shore Blvd West was built for William Belmont Common in 1938.  It had a major addition to it in the 1990s which seems to have obliterated many of the original features of the house except for a bit of the front facade.

William Belmont Common was the son of William Common and Lucy Lang and was born in London, England in 1899.  This family immigrated to Canada in 1905.

They lived in Quebec and later in Peterborough before moving to Toronto.  William Belmont Common joined the Royal Flying Corps in the First World War.  After the war he attended Osgoode Law School, graduating in 1923.

In 1925 he married Eunice Watt in Toronto and had two children.

He practices law for a number of year before joining the Ontario Attorney General's department in 1926.

His first wife died in 1931 and he married his second wife Mona Margaret Shirley in 1935.

In 1957 he was appointed as Deputy Attorney General in Ontario and held the position until 1964.

In 1963 as Chairman of the Joint Committee on Legal Aid he proposed a system of legal aid for Ontario, thus becoming the father of Ontario's legal aid system.

He retired in 1964 but instead of living a quiet life on his estate he took on new challenges as the Chief Election Officer of Ontario and was appointed the Clerk of the Ontario Legislature.  He finally retired in 1971.

Posted by Michael Harrison at 6:18 AM